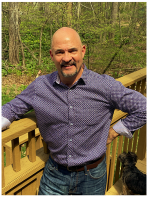 David VanSteenkiste
Co-Founder & Coach
After a successful career in engineering and sales, in 2012 David decided to pursue real estate investing. Between 2012 and 2014 David completed approximately 20 fix and flips and a handful of wholesale deals and accumulated a handful of rentals.
In 2014 he fell in love with land investing because of the ability to create massive cash flow quickly, the elimination of tenants, toilets and dealing with contractors and the ability to outsource most of this business. But most of all the ability to create geographic independence. David sent out one mailer to test the land flipping business model. He experienced some immediate success, but had been offered a great sales job. So he shelved land flipping until he could get up to speed in the new job, with the intent of starting it back up as a side hustle.
In 2015, David started up land flipping again as a side hustle and experienced immediate success.
Since then, David has quit his job and done over 200 land deals. David has mentored and coached several successful new land investors and consulted with many experienced land investors to help them get unstuck.
David lives in Colorado where enjoys being a groupie, following around his musician daughter. During the warm months, you can find David at a popular patio around Denver with a glass of wine in hand, watching Wrenn Van belting out popular Funk, Blues and Rock genres. But David finds his true zen on a quiet trout stream with a fly rod in hand.

Business Member of the Month

RIG’s Business Partner of the month is Atlas Real Estate, providing Property Management and Real Estate Brokerage services focused on financial autonomy in Denver, Colorado Springs and Phoenix. They use their experience as investors to help people understand how to use real estate as a platform to build long-term wealth.
At Atlas, They understand that smart investing is the main thing standing between you and your financial goals. Their company provides forward-thinking real estate strategy and turnkey solutions for passive wealth building. They arm you with the awareness and knowledge you need to make the smartest decisions possible, and we guide you through a simple, pain-free way to produce real estate results that work for you.
Their team is more than your typical real estate agency because as property owners ourselves, we see things from your perspective. They’ve learned and earned our market authority from years of personally road-testing our strategy to deliver a battle-tested approach that produces results. From a collection of bumps and bruises they’ve earned along the way, they pass their proven formula on to you. For them it’s as simple as owners helping owners achieve their goals and realize their dreams.
Contact Evan or Jennifer at evan.rice@realatlas.com Jennifer@realatlas.com